Josh, as he appears in 'Kujira' in the chapter titled 'Keitai Friends.
I had to post today to boast about the flood of downloads for Kujira I have this offered as a free download with a coupon at ebooksfreefreefree and have seen a ton of action overnight.(Coupon code - ZX74Q at smashwords expires on 20th may) It is also going to be posted on indiebookslist on the 14th of May. This will appear with an excerpt from Kujira as appears in the previous post on this blog.
BTW: I have managed to publish 'Memoirs of a Vending Machine' on Amazon. I have to wait for the search data to appear so it might be hard to find. Just follow the link I have provided. The downside is that it's not free. The book still remains free on Smashwords and is a popular download. I really recommend reading it before you tackle Kujira.
Cheers
Beerubaraoyaji
Posted by Beerubaraoyaji at 19:02 2 comments:

I am posting to a new blog and needed somewhere to link to for the text. Thought it might be a good idea to put it here as well. Enjoy. If you like it you can buy it at the following link.  Kujira 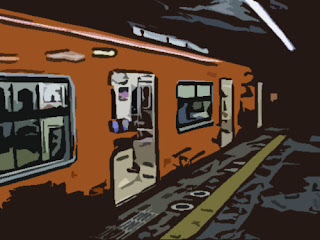 An impression of a 'Hankyu Sen' train carriage at Umeda station.

The download frenzy has subsided and is now a steady stream. Happy that readers are getting something from  Memoirs of a Vending Machine. I certainly enjoyed writing it and have some very fond memories of the characters and the situations that inspired the book.  The above link has got to be one of my all time favourites from a Japanese band, 'Ulfuls' pronounced 'Urufuzu'. This particular song, Banzai  pops up in the section titled 'Kinki Karaoke'.

Jon, Mark, Mike and Jeff are sitting at the bar and Jon takes the microphone selecting a Beatles song to sing. Unfortunately his talent does not match his enthusiasm.


Jon took a breath and then, out of time appeared to bray like a sheep, the sound enhanced with some expensive sounding reverb and echo.

Mark shows Jon up and picks this song to sing.


. "Yeah", he roared melodically in a rough but rounded male rock growl, absolutely appropriate for the melody and the style. There was an electric guitar introduction to a basic rock beat that highlighted the vocals. Then, with a spectacular rock and roll drum roll ending with a splash of cymbals the beat was laid down with drums bass and guitar in preparation for the body of the song.

If you are at all interested in what this song actually sounds like, click the link above and let me know what you think - another Urufuzu song appears in the follow up to 'Memoirs', Kujira but I'll leave that for another time. 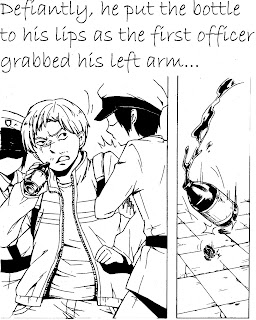 Firstly: I can't resist posting these manga frames from 'Keitai Friends". This is the scene where Josh sees the police after exiting the bookstore with a magazine in his pocket. Ironic that the author has chosen to publish as an e-book. If only Josh had known about Smashwords; he would have downloaded a copy and would not have been tempted by the hard copy magazine.  'Keitai Friends is a chapter of Kujira  available at smashwords and most of the other e-book outlets. The bottle dropping to the ground is a bottle of Dekavita. It tastes like any of the energy drinks available today and is full of vitamins. They have been drinking these things in Japan since the 80's as far as I know. As a foreigner in Japan I used to call these types of drinks, 'genki drinks' because they would charge you full of energy. They are still available at any vending machine anywhere in Japan.

Main Bit: Wow - double, triple, quadruple downloads in one day for 'Memoirs of a Vending Machine'. What was that? Still no new comments but a few readers have clicked the 'like' button. So... this means my readers are either neutral or disinterested but not negatively critical or they love the book but just couldn't be stuffed saying so. I mean... it's obvious isn't it? Anyway, a bit of a feel good about myself day today. I feel loved and appreciated. If you are one of my readers, thanks for that. 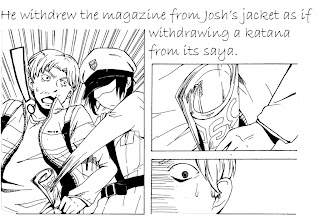 I wanted to acknowledge the work of two amazing young ladies from Japan who did the artwork for a section from 'Keitai Friends', one of my ebooks. Thanks to Kumi Shimizu and Maho Kanagawa, both art specialist students from a school in Japan I visit as a sister school program coordinator. I know that they spent a lot of time on the above images and the others that capture a small scene from the story. They have graduated now and are off to bigger and better things.  I have unpublished this story for the moment as it appears as a chapter in 'Kujira'. You might have noticed that this is the image I have used for the cover of Kujira. I will be uploading the entire collection of images as an uninterupted manga section somewhere in Kujira sometime in the future.

Meanwhile, 'Memoirs of a Vending Machine' is still going 'gang busters', appearing all over the shop - the internet shop that is. I found a cute little 'edu blog' where students of ... literature or  English or ... not really sure but I'm sure it is connected with reading, post predictions and questions for the author as they read through various books - ebooks in this case. It was a real buzz to see them taking 'Memoirs' to pieces and testing their assumptions and questioning the author. The buzz is that like it or hate it, these kids are becoming more literate and critical and in some small way I have contributed to this. Makes me want to write more!

Anyway, a new phase I picked up the other day from an international student I am looking after at the moment. Nagare ni noru literally means to ride on the flow. I say to 'go with the flow'. Means the same thing and captures my mood recently. I am not sure where my ebooks are taking me at the moment. Lots of downloads but not a lot of comments and very little money for the ebooks I have published at a price. Nevertheless, I feel like things are moving in a positive direction so I'll just go with the flow and keep plugging away at promoting my creations and working on some new ones.

That's all for now so mata ne ! (Catch you later)

Kujira Gets a Makeover. 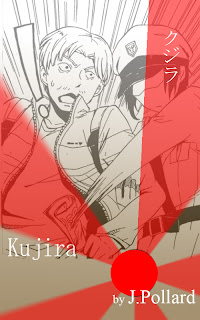 Kujira is not only back but it has a new look and  a new precis. I've been thinking about this for a while and the image I've chosen kind of fits the mood a little better I think. Soon I intend to 'unpublish' Keitai Friends and include the artwork from 'Keitai' in Kujira. Keitai Friends appears in Kujira as a chapter anyway and doesn't really need to be 'out there' in its own anymore. It's still getting a bit of attention however and is still a popular download so I might give it a little more of a run before I do anything radical. Rest assured, I'll announce any changes on this blog before I take any action. 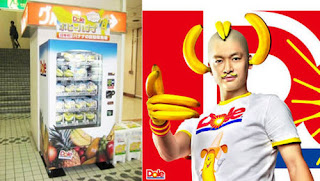 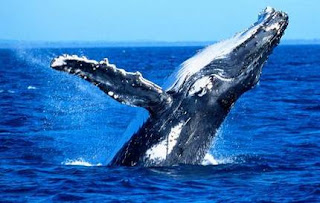 I was busy last night doing a re-edit for Kujira. I have made some of the narrative passages a little more 'user friendly' and added a couple of sentences here and there just because I could. There are no substantial changes so if you have purchased previously you shouldn't notice much of a change. I noticed a couple of repetitions of Japanese word definitions so I deleted these, just to make the text a little less 'busy'. It's back at  $0.99.  www.smashwords.com/books/view/37636

BTW: If anyone reading this blog has not read any of my books, you should know that I often include Japanese words and phrases with a traslation in parenthesis next to the word or phrase. Some people hate this - my last reviewer for example - but others love it. So... I will not be changing this feature of my books as it is my readers who have said they like this and not my reviewers.

Also:  Memoirs of a Vending Machine is going 'gang busters' and has taken over 'Keitai Friends' downloads by a huge margin. Sales are up in general and I am feeling encouraged and appreciated. 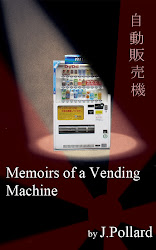